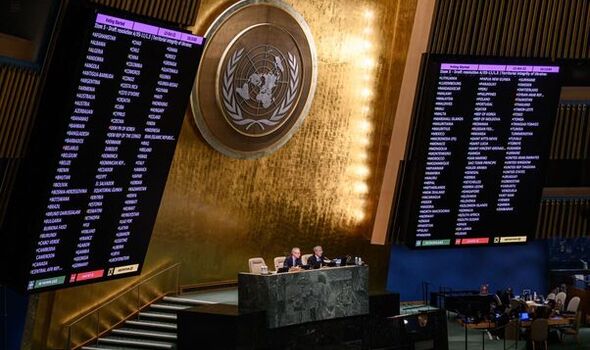 The resolution was supported by 143 countries yesterday, while 35 abstained – including China and India. While it was the highest number of votes against Russia since the invasion, there were also dissenters.

The resolution called on the international community not to recognise any of Russia’s annexation claims and called for their “immediate reversal”.

It expressed “strong support” for, efforts to de-escalate the conflict through negotiation.

Ukraine President Volodymyr Zelensky said he was grateful to states that supported the vote.

He added: “The world had its say – Russia’s attempts at annexation are worthless and will never be recognised by free nations.”

US President Joe Biden said the vote sent a “clear message” to Moscow. He added: “Russia cannot erase a sovereign state from the map.”